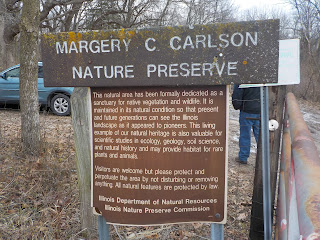 About the Margery Carlson Nature Preserve
234.34 Acres, purchased in June 1976 with an addition in June 1978.
This nature preserve contains young forest, bluffs and streams typical of sites near the Vermilion River in the Grand Prairie Section. Some excellent examples of eroding bluff plant communities may be seen here. Over seventy-five species of flowering herbaceous plants have been identified in the preserve including forked aster and bottle gentian. Deer, beaver and red fox are also known to inhabit the area.

This preserve is named in memory of Margery Carlson, who was instrumental in protecting the area, formerly known as Big Bend Nature Preserve. Carlson was a founder of the Illinois chapter of The Nature Conservancy, serving the chapter as its first secretary and later as trustee.


I will leave you with this: A single act of kindness throws out roots in all directions and the roots spring up and make new trees. The greatest work that kindness does to others is that it makes them kind themselves.

Posted by Hike With Edna at 1:00 PM No comments:

What a great day to hike!  We were scheduled for the Nature Preserve, but with hunting in the park we had to adjust our hike.  We left the lobby of the Lodge at 9:00a.m. and headed out on the Campanula trail to Wildcat Canyon and then further East on the bluff trail to the Lonetree canyon staircase down to the River trail to LaSalle Canyon.  There was a tree down at the entrance to Lasalle Canyon.  Some of the walkers went through the fallen tree.  I took my photos and turned around.  The weather was fabulous!  More on wearing foot attire later....


I will leave you with this: Every job is a self portrait of the person who did it.  Autograph your work with excellence.
Posted by Hike With Edna at 1:38 PM No comments:

I love leading the Mega Hike especially the mid week mega hike in November.  This year my guide that went with me was Peggy. We boarded the trolley at the Lodge and the trolley took us to the East end of the park to Illinois Canyon parking lot and we walked back from there going into every accessible canyon and overlook.  Once we got back to the Lodge, there was lunch waiting for us.   Yumm!  We had a 1/2 hour lunch and then departed for Starved Rock and the West end of the park.  Great weather and none of the crowds that are here for the weekend Mega Hikes.


I will leave you with this: Never get tired of doing little things for others, sometimes those little things occupy the biggest part of their hearts.