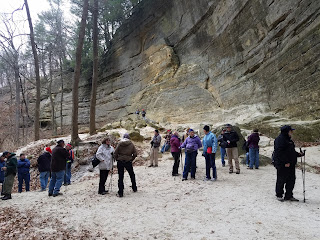 Today the sun stayed hidden while we took a walk to St. Louis Canyon.  We left the Lodge's Lobby and headed out on the West Bluff trail.  We had great top views of Aurora, Sac and Kickapoo Canyons.  St. Louis Canyon had a little bit of ice.  We are waiting patiently for more ice to form.  On the way back to the Lodge, some walkers went into Aurora Canyon.  Today we had 45 hikers in attendance.


I will leave you with this: Everyday is precious! We are not guaranteed tomorrow.  Use today wisely! We must not allow the clock and the calendar to blind us to the fact that each moment of life is a miracle and mystery.
Posted by Hike With Edna at 1:41 PM No comments:


I will leave you with this: Sprinkle a little love into someone's heart today! Be a freind, be a blessing, spread joy everywhere you go.  The world would be a much better place if we all focused a little more on kindness.
Posted by Hike With Edna at 3:18 PM No comments: 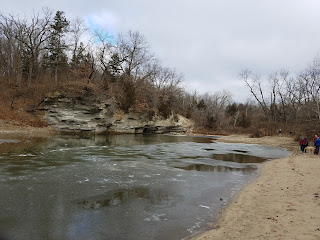 This nature preserve contains young forest, bluffs and streams typical of sites near the Vermilion River in the Grand Prairie Section. Some excellent examples of eroding bluff plant communities may be seen here. Over seventy-five species of flowering herbaceous plants have been identified in the preserve including forked aster and bottle gentian. Deer, beaver and red fox are also known to inhabit the area.

This preserve is named in memory of Margery Carlson, who was instrumental in protecting the area, formerly known as Big Bend Nature Preserve. Carlson was a founder of the Illinois chapter of The Nature Conservancy, serving the chapter as its first secretary and later as trustee. 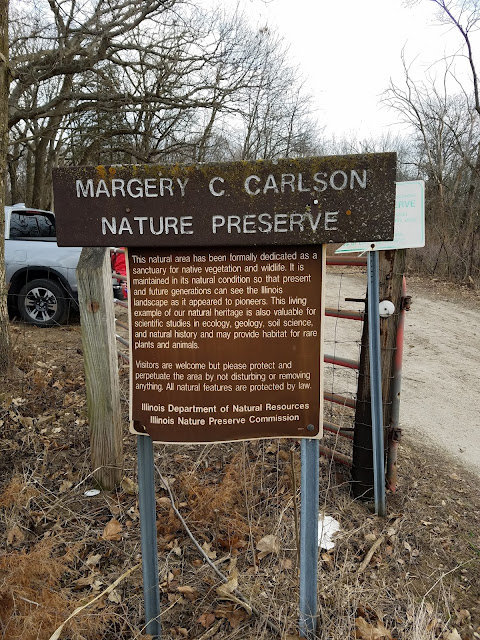 I will leave you with this: Nature's peace will flow into you as sunshine flows into trees. The winds will blow their own freshness into you, and the storms their energy, while cares will drop away from you like the leaves of Autumn.” “The sea is emotion incarnate. It loves, hates, and weeps.

Posted by Hike With Edna at 1:25 PM No comments:

Today's walker's club met on Wednesday the day before Thanksgiving.  We stayed near the lodge and hiked to the top of Starved Rock, into French Canyon, Lover's Leap, Eagle's Cliff and Wildcat Canyon.  It was a gorgeous day to be hiking.  We did three major stairways up and down.  One more  than we needed to. 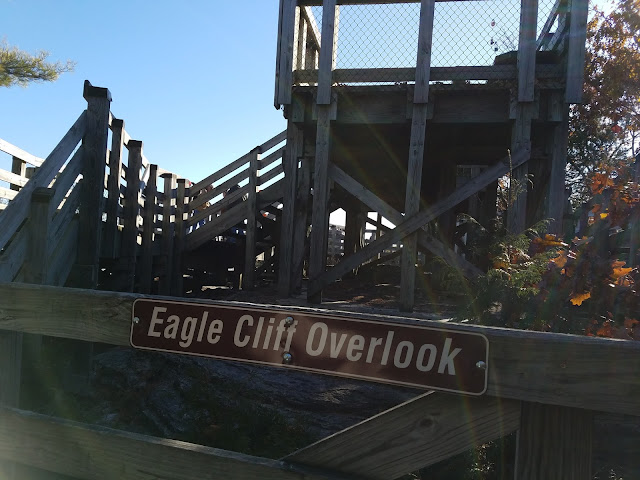 I will leave you with this: Gratitude can transform common days into Thanksgivings, turn routine jobs into joy, and change ordinary opportunities into blessings. ...